We've been doing hard time for the past year, paying off tech debt. While this type of thing slows down development in the short term, it speeds up all future development and extends the useful life of the product. With v0.4.0, we started the migration to a new tech stack. That new tech stack has now been applied to the rest of the application. Please join me for a tour.

Logging in brings you to the new home screen dashboard, providing quick access to your recently modified decks and recently posted news. 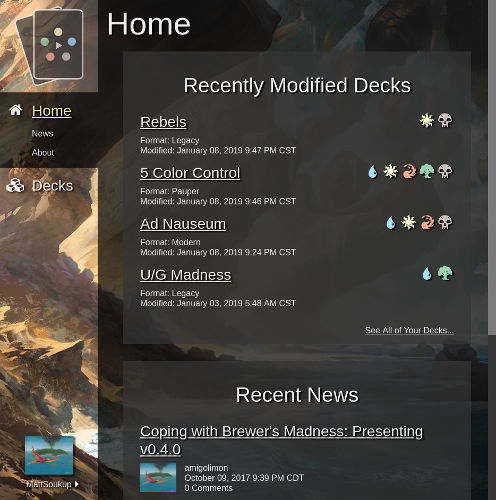 You'll also notice a change to the outer shell. We moved the user avatar to the bottom left, increased the size of the logo, and reorganized the menu options. We hope this provides a more intuitive user experience.

The old, table-based decks page got a makeover. Decks are now represented by tiles, and each format has its own scrollable carousel of decks. 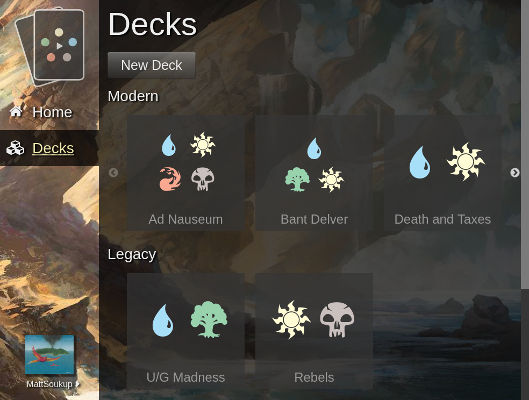 The UI of the deck editor got shuffled around a bit. 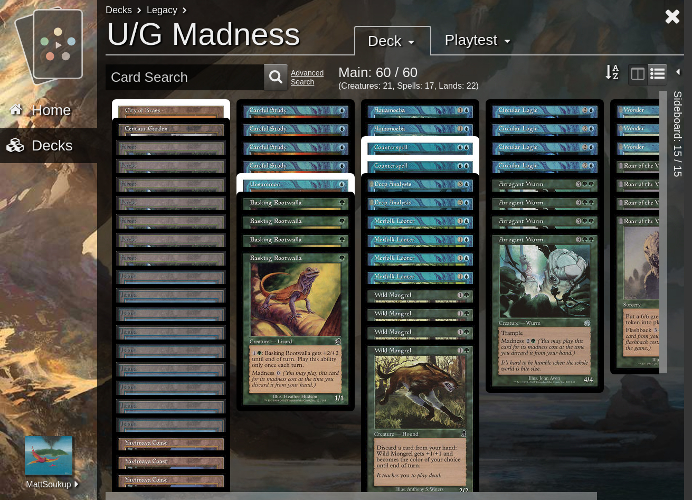 All of the deck editor changes:

• The deck's name is now the prominent part of the screen (with support for inline editing)
• The search input got moved into the Deck tab where it contextually makes more sense
• The sideboard panel now appears to the right of the maindeck rather than underneath
• Removing cards from the drag and drop deck view has been made more intuitive with a drop target
• The Add Cards Dialog has become the Update Number of Copies Dialog
• Added ability to sort cards in deck in descending order (e.g. by type)
• Share Deck is temporarily unavailable as we rethink the sharing experience
• Filter by Color has been removed. Please use Sort by Color instead

On the Display Preferences page, a new Install App option appears. Here, App refers to Progressive Web App (PWA), technology allowing websites to be installed like native apps. When MITB is installed as an app, it can be launched from the desktop in its own full-screen window, giving more real estate to deck building and solitaire mode.

In addition to the changes listed, we've made many bug fixes and performance improvements. This was our biggest release to date! We're very happy to be freed from the old tech stack (RIP YUI 3).

Stay tuned for v0.6.0 and a return to new features! Expect more improvements to the deck editor and solitaire mode! Thanks for reading!