Since we last spoke, mitb's made two big steps toward v1.0.0.

But first, a note about future releases: from this point forward, mitb will adopt a continuous delivery release schedule. Traditionally, a release bundles many features together, but the changes that are done at the beginning don't see production until the last change is finished. That could be months later. Continuous delivery means releasing code as soon as it's done.

While in beta, we will uptick the minor version by 1 for each new major feature. Minor features will continue to get released on that same version line until the next major feature is released.

Now, onto the release notes!

Whenever a flip or transform card is viewed, both sides of the card will be shown together rather than requiring an extra click to flip back and forth. 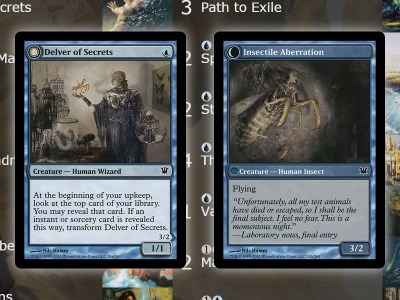 Both Sides of Transform Card Presented on Screen Together

A transformed/flipped card can be found in the search, but only the untransformed/unflipped version will ever be added to the deck.

• Switch cards between main and sideboard in card list view

You can now hover over the # of copies and wait for a swap icon to appear over the card art.

The pause was added to prevent errant clicks from changing the deck. (This feature was already present in the drag and drop view by dragging a card between main and sideboard.)

To make it easier to tell how many basic lands a deck has, they are no longer interleaved with the non-basic lands.

Advanced search can be displayed by clicking the Advanced Search link or simply searching for a card and clicking the search button (as opposed to using autocomplete). 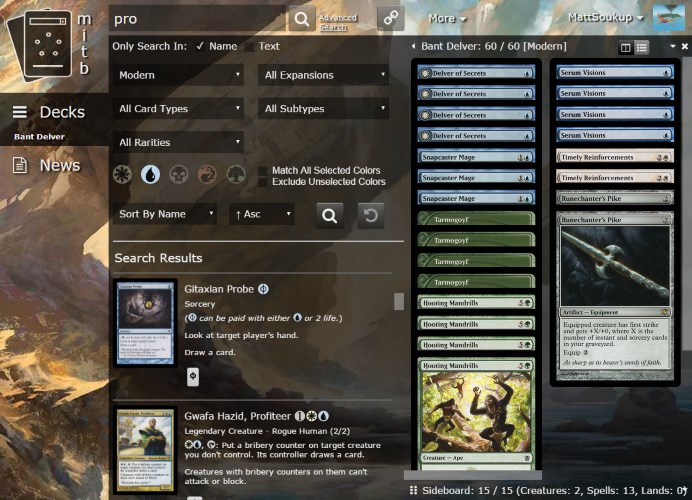 Advanced Search Slides In and Out from the Left

Full text search is supported over the card name and card text or optionally over one or the other. Partial matching with a prefix is also supported, meaning searching for blast will find Blastoderm but searching for derm will not.

A number of other filters exist in the form of drop downs. Format will default to the current deck's format. It also takes into account any banned or restricted cards by excluding them from the results.

When a card has multiple types, it will now be sorted with the "dominant" type's category. A few examples:

For a complete list of features and bug fixes, please see the Changelog on the About page. You can also view the open issues in our issues repository for the most up-to-date information on current work.

Thanks for reading, and stay tuned for v0.4.0 and its flagship feature: Solitaire Mode!